I get out of bed, give my dogs a treat, make a cup of coffee, and begin my day by sending out memes to remind OL fans what’s missing from our lives.    All I’d need to add is a cigarette hanging out of my mouth, giant curlers in my hair and a some fuzzy slippers! Just look me up in  the dictionary!

I have tried to serve the fandom for over two years through the Church of Heughanology, memes, Starz Wars crawls and birthday cards, but I need to do more to fill this void!  Think back to what our lives were like when Season 2 was being aired.  For 14 weeks, I felt alive and interesting.  I got dressed every day.  I got my nails done. I drank more wine.  I ate French food.  I even bought a new outfit for every Saturday night, just like Claire in every scene! When it ended, I fell back into my old habits.  But Norma D, your Chief and Only High Priestess and Warrior Princess, never rests.   I put my thinking cap on to explore what I could do to entertain our fandom during Droughtlander 2.5?

Then, like a lightning bolt, it came to me!  (I think the hat attracted the electricity. I hope I didn’t suffer any permanent dain bramage!)  What if I built a theme park with rides and attractions to make any Outlander fan forget their misery? A place all of us could visit and capture the essence of Outlander without the cast and crew having to work 24-7 for us!   Tadah!   Here is the result:

As I worked on a presentation for my investors, I came up with some ideas for rides and attractions.  Besides the Outlander Bookmobile and the Autographed Bobbleheads, these are a few of the offerings ahead:

An up close look at where all those hunky highlanders are born.  It turns out that Outlander has figured out how to grow their own!  See them in their natural habitat in various stages of development.  I won’t tell you which of the cast came from the Highlander Farm, but suffice it to say, they were some big ones.

This is a fun ride featuring 6-8 seats surrounded by tartan!  As participants whirl around on the ride, they get to peak under Jamie’s kilt.  At the end of the ride,  a big surprise pops up!

Claire and Master Raymond will be offering home-made hallucinogens and other medicines at their apothecary, Standing Stoned.  A few of their offerings will be: 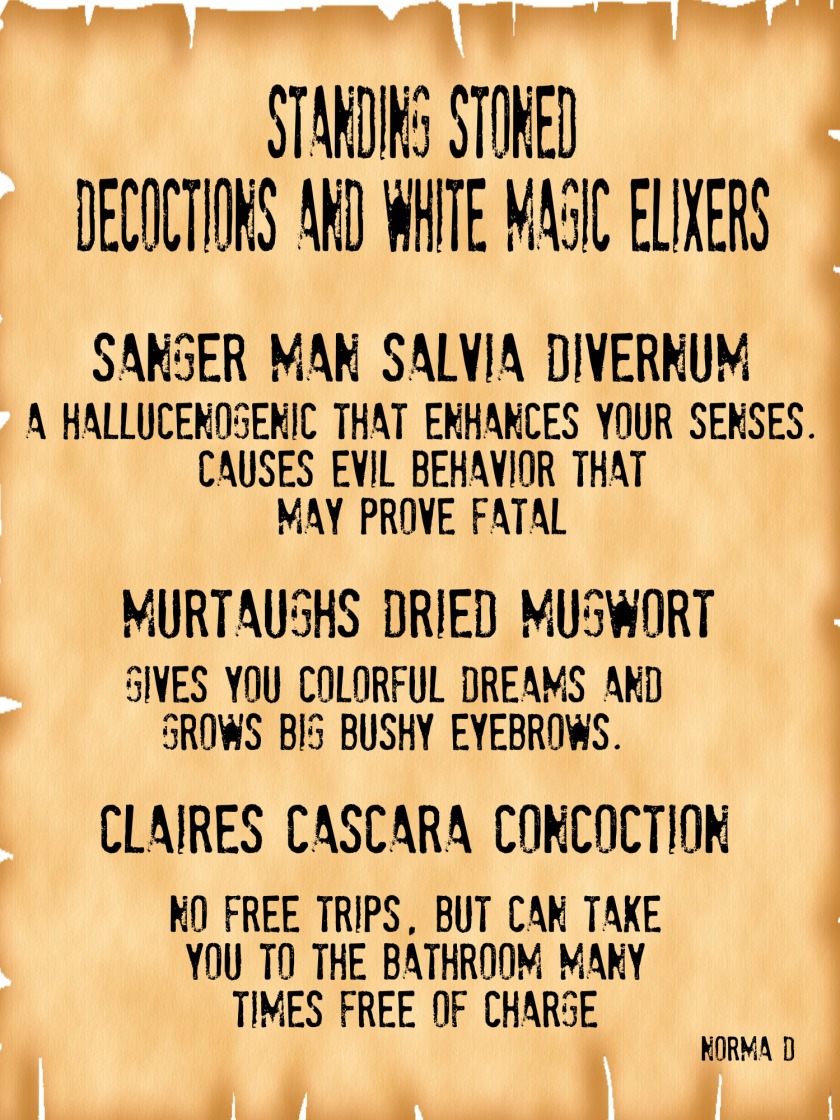 After ingestion, customers will be treated to a psychedelic version of Prestonpans!  Just imagine it now…..

This ride is best done naked with your legs apart!  Thrill to the plunge and get the ride of your life!   Hours are limited due to wrinkling.   (Jamie can only take so much exposure!)  Be prepared for long lines. 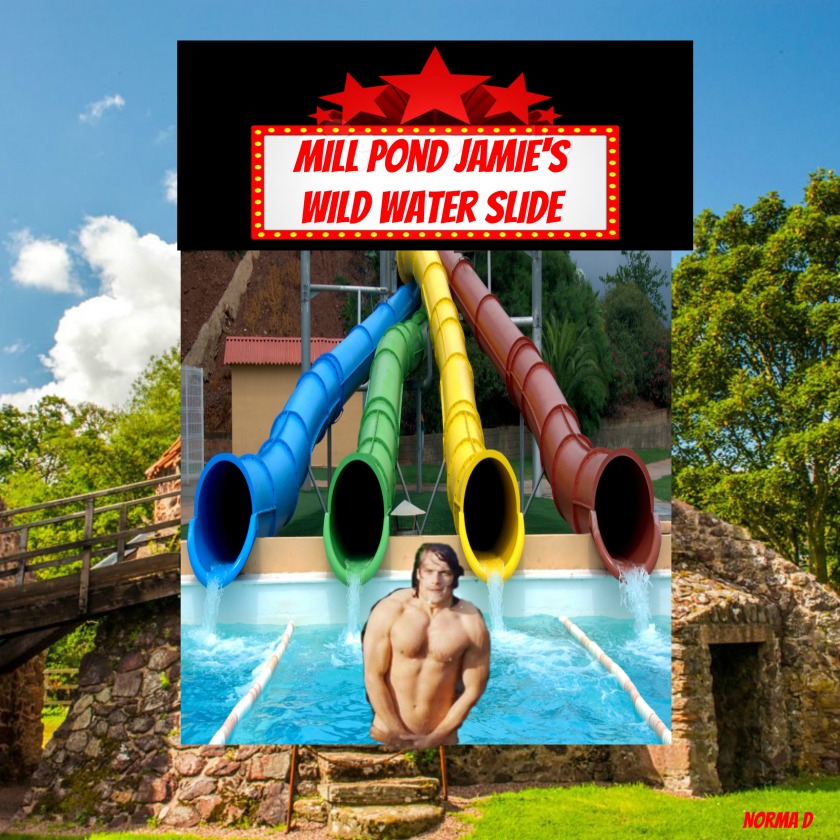 You’ll be hanging around this ride.   Timed to last as long as you can hold your breath, the thrill is in surviving!  Only for those who like to live on the edge!   It starts with each person standing on a hangman’s structure (Much like this one).

Then the floor falls away and your swinging like a-well-a hanged man. (A change of clothes is recommended.) 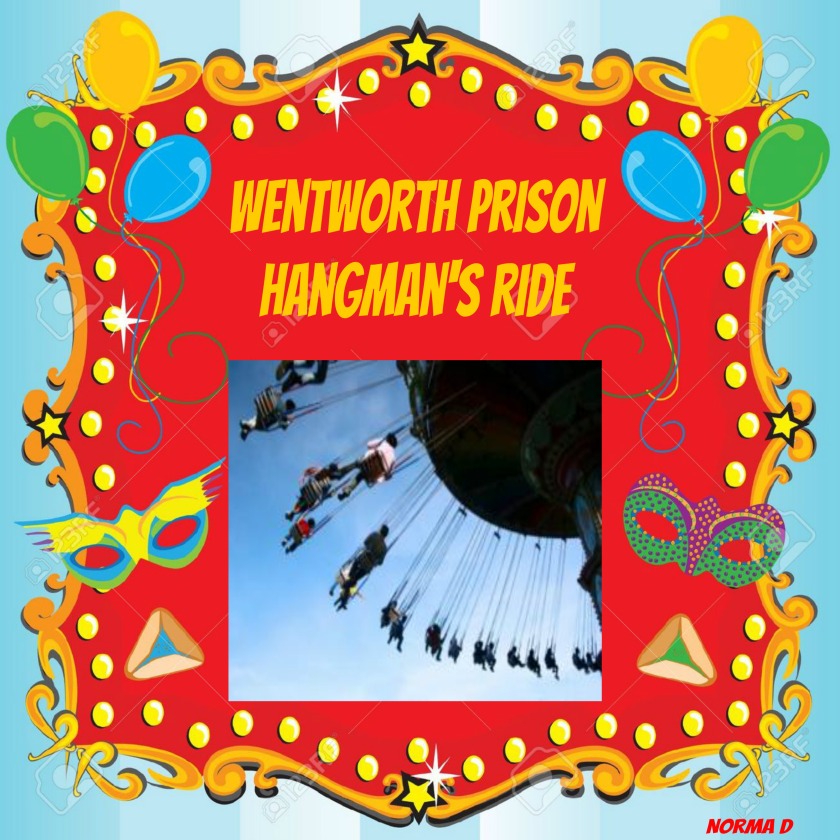 Bring your hatred for Black Jack Randall and zap it away!  Souvenir Black Jack Dolls for all players!  No time limit.  No shot limit. You’re free to shoot the s–t out of him with no fear of arrest!  Ready! Aim! Fire!

During park hours, there will be four shows daily starring the cast of Outlander.  Performers will vary depending on availability and/or if they died in the show.  Here is a sample program for our first musical offering :

We are planning to add an “Outlander on Ice” show,  “Outlander and Beyond” (a Bear McCreary concert),  The Horses of Outlander (a show starring Donas and Thistle joined by the Versailles Mounted Stallions Brigade), and The Fraser Family Sex Show (self-explanatory).

Ride with Frank Randall to the Standing Stones and listen to him bleat Claire’s name like a sheep!  “Claaaaiiiirrrreee!” Go over hill and dale in his snazzy 1946 “Somethingorother.”   The ride ends with Frank going downtown!  Like Rainman, Frank is a very good driver! Def…def…definitely!

Mrs. Fitz has been busy adapting her 1743 recipes for delicious food served in a modern theme park!    Some of her favorites are Haggis Balls, Chorizo Bannocks,  Black Pudding Pretzels, and Shortbread Corndogs!

For those of us who would like the forks in our palms explained, Mrs. Graham will be available for readings by appointment only.   She also will be selling Mary Kay Creams and Emolients.  A little lotion can do a lot for cracked palms.  The lotions could give you a whole new outcome to your reading!

Earlier, I mentioned there would be programs for our children.  When you arrive at Limboland, you can dump the kids off at Mrs. Crook’s Day Care Center.  There are many fun events planned for the kids, while you are off dreaming and drooling!

All the kids will want to jump on board Wee Roger’s Airplane.  The good thing about this is that as Wee Roger grows up and gets bigger, so does his airplane!  It makes sense.  Little boys have little airplanes and big boys have big airplanes.  I volunteer to be the flight attendant on Big Roger’s Big Airplane.   I think there is some double entendre here that is not fit for children, but I couldn’t help myself.

Hours of fun making ugly crafts to give to your least favorite teacher, uncle, or sibling.  Children will learn what feathers, stones, bones, weeds, human hair and string can do to bring you bad luck!

Learn the tricks of petty thievery as Fergus does it in Outlander.  This could serve you later to feed the parking meter.  Send your little one out to lift some spare change when you’re a “little short” (just like Sandringham’s dwarf).  The kids also learn what to do if they get caught, to avoid a jail sentence.

No Police Officer could arrest a child with these excuses!  Not only is the training fun, but it could turn into an occupation for some of the more dexterous of the students.

When she heard about Limboland, Mary Hawkins invested her widow’s pay from the British Army to build this ride for the children!  Our safety rules are the most stringent in the industry.

Use the seat belts.

Hold on with both hands.

Keep your hands and feet within the ride.

Ride as long as you want.  If you puke, you’re out!

Let me just say, I am not delusional.  I know I’ve gone off the deep end with this.  So far, the investors are impressed.  I have collected $14.32 (US) so far but that was what I found under the couch cushions.  I still have a way to go in order to get this project off the ground.  At this rate, Limboland will be in limbo until book nine is published, distributed, read 5 times, and filmed for TV.  At least after reading this, there are only 7 or 8 months left to wait.  7 or 8 months is really only 6 1/2 or 7 1/2 months if we start getting previews.  It could be even less if Lionsgate (new owners of Starz) puts the pressure on about meeting ROI (Return on Investment) projections sooner than expected.  So, it could be 5 or 6 months!  There’s the holidays somewhere in there.  They’ve already started work on Season 3! So, it could be 2 or 3 months when you take all of that out.  You just have to believe!